June 05, 2013
We have a plethora of birthdays over the May/June/July period in our home.  Well, with six children it always seems to be somebody's birthday!
This year we gave in and let three of our children have birthday parties.
Unfortunately for us, due to the ridiculously extravagent and over the top organisation, decorating and intense attention to detail of previous family parties...the expectations were high high high!!

This party was going to be super fun.  Lukey was turning 10 and hadn't had a party in at least four years.  The latest craze for him is Minecraft.  An online building/creating game.
First things first... 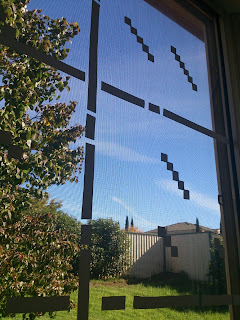 The minecraft windows.
These were made using white electrical tape.
Simply cut the tape into strips and little squares and stick on your window...it looked AMAZING.
Took ages though!!
It peels off easily enough...but after a few days leaves a bit of a sticky residue.  Found this came off ok using a bit of cream cleanser and a sponge then cleaning with paper and window cleaner. 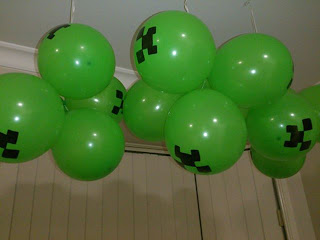 Creeper balloons
Ok, everything in minecraft is supposed to be squares...but hey, these looked super cute over the party table
Simply draw on creeper faces with black permanent marker.
I hung little 3M removable hooks on the ceiling and hung the bunches of balloons.  The windows behind you can see had "minecraft" windows stuck all over them... the blinds were opened for the party
The table had a simple green plastic cloth,
square plastic green plates and cups and giant fat green straws.  We only had 10 kids so sat them all at places at the table. 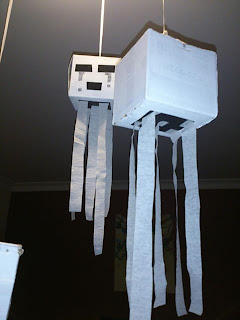 Mini Ghasts
These sobbing little ghosty creatures were hanging in our living room which we created to be the portal the kids had to walk through to get to the party room.
They were made from any little empty square boxes we had, painted white.  used black electrical tape and coloured in with lead pencil the tears.  simple crepe paper streamer strips underneath.  Hung with string to the light fitting.
The portal was a zillion strips of purple crepe paper streamers from our doorways so the kids had to walk through it.  I stuck EVERYTHING with 3M poster strips and hanging stuff so it was all easily removable and left no marks 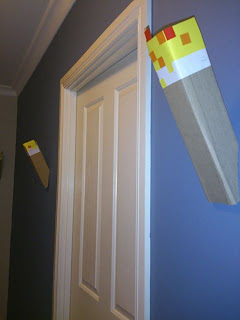 Minecraft torches
So these are important because they keep away zombies!!
Made these just with bits of old boxes, white paper, yellow paper and bits of red and orange.
You could just print it off if you wanted to...
I just folded it together and then 3M'd them to the hallway walls and they looked amazing!. 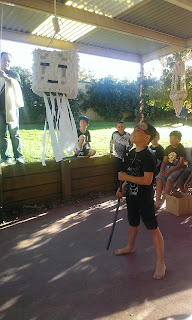 Minecraft Pinata
This was ridiculously easy to make.
You can buy crepe paper already fringed like this.
All I had to do was secure a wire hanger to the top of the box with thick tape,
then completely covered the box with two layers of paper mache (newspaper strips, flour and water glue).  The added the white paper layer and decorated with little strips of black, grey, a black square on the bottom and white streamers.
Cut a teeny flap in the top and filled with glow in the dark bouncy balls, wrapped lollies etc.


Other:
We also printed off minecraft TNT pictures and covered little boxes,
.

﻿The games we had were:

The kids sat in a circle and in the centre we had two family size blocks of chocolate that had been in the freezer for 2 days (so they were SUPER hard)
a knife
a enderman head (a box with a printed picture on the front)
and a dice
The kids took turns rolling the dice and if they rolled a six, they quickly put on the head, and tried to chop chocolate into little squares and eat it.
Hilarious.

Circle again...
Press flour into a bowl and carefully flip over on to a big board so you have a dome of flour.
Place a ring on the top
Provide a big knife.
Good to put on an old washable blanket or cloth.

The kids take turns in the circle to gently slice a sliver of flour from the dome.
As the dome gets smaller and smaller they get more nervous, so funny...MUST NOT let the ring fall in!
Well,
When the ring tumbles in to the flour, the child that let it fall in has to get it out...with their TEETH!
So, funny, flour everywhere 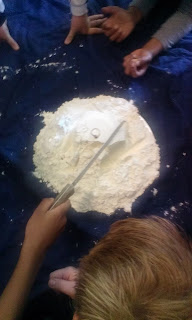 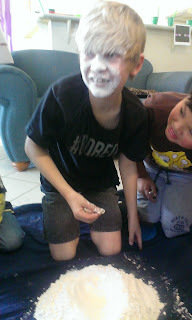 The child receives a prize.

My husband is the king of treasure hunts.
We printed off heaps of pictures of minecraft swords and put a coloured dot for a team on each one
He wrote clever clues to lead the kids in their teams all around the garden.  At each point they had to find their sword with their coloured dot and return to him for the next clue.
They loved it and all worked well together.
The winning team received prizes each.

Placed four pictures around the room, one of a minecraft sword, one of a creeper, one an enderman and one a ghast (you can use this game for ANY party)
Play music, when it stops kids rush to one of the pictured corners and a piece of paper is drawn from a box (a tnt box in this case).  Whichever picture is written on it, they are eliminated.  Until only one child remains and receives a prize.

This was so much fun and really made the party!
Basically, we just looked online and made food to match the game.
The game has chicken and potato so we just ordered a bunch of KFC chips and chicken as the kids all love that.
Additionally, we made rice krispie treats coloured black for coal.
Green jelly slice decorated with sour straps for creepers.
Marshmallow mushrooms.
Torch cookies (sugar cookies shaped like minecraft torches dipped in white, yellow then orange icing)
and finally the minecraft cake (which could have been a lot better, but the kids loved it) - simple chocolate mud cake, double layer with white fondant icing and painted fondant squares. 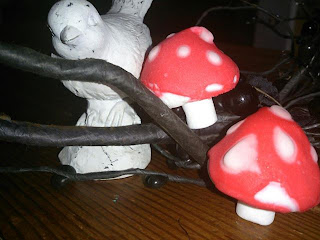 I like these because you can see some of the food we had.  We basically planned
all the foods to match foods in the game, watermelon slices, chicken and potato (kfc cause boys love that at age 10 better than crummy ol nuggets) 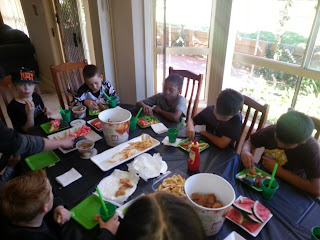 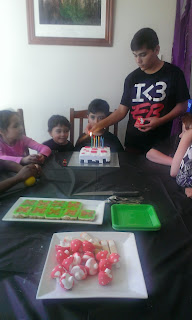 Here you can see the green jelly creeper slice and the mushrooms and cookie torches. 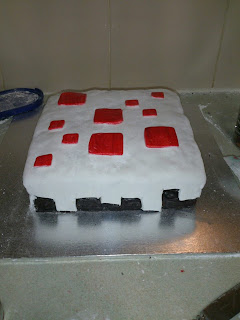 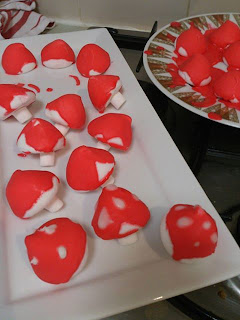 The cake of course was similar to the cake from the game (my frosting skills leave a lot to be desired!) and making the mushrooms (super easy, keep for a week in a container - easy make ahead food)

﻿Prize Suggestions:
This was probably my biggest dilemma...10 year old boys...prizes had to be pretty good!  But still cheap...
So, we had
Handballs (they loved these as most of them play at school)
Individual lego mini-figures
Mini racer cars
blob monsters (it's a putty stuff and you stick the plastic monster bits in and the monster melts)
We made sure that every boy received at least one prize. 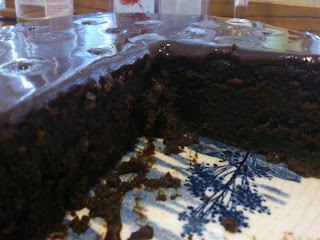 I've tried baking many many MANY mud cake and chocolate cake recipes over the years, recipes from scratch, recipes using boxed packets, recipes others recommended on the internet and FINALLY have found what I feel is the perfect, super thick, moist, delicious chocolate mud cake recipe EVER.  It always works (even if you don't measure the ingredients perfectly), and you can simply double it if you want to do a huge tin.  It is extra especially delicious if you make the chocolate ganache to go on top!  Basically if you see chocolate on sale - buy two blocks and you can make this with the icing.  Soooooo good, your friends and family will be begging you to bring it to events.  AND you will never want to buy another mud cake again because you will have this SECRET recipe! Ingredients Cake • 250g butter • 200g dark chocolate • 375ml strong coffee ( I used really hot water with 3 tablespoons instant coffee - or for a less "coffee" hit, I usually use two tablespoo 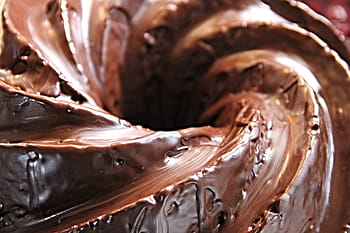 Ohh, chocolate ganache - yum!  However, you want the perfect ganache for your cake, filling or truffles.  Want a runny ganache to drizzle over a cake or icecream?  then make your ratio 1:1 chocolate to cream.  Want a thicker ganache to pipe into macarons or roll into truffles when it's cooled?  then make your ratio 2:1 chocolate to cream. Huh, math?  Ok, here it is easily explained... use 1 block of Aldi chocolate.  Say you choose dark chocolate.  Aldi big chocolate bars are 200g.... so... Runny Ganache: 1 x 200g chocolate block 200 ml cream Thick Ganache 1 x 200g chocolate block 100 ml cream Let's see how to make it step by step - a good ganache that isn't grainy, and is smooth and glossy. Step 1: Chop your chocolate up into little slivers Step 2: Put the chopped up chocolate into a bowl Step 3: Microwave the cream for about 50 seconds (you want it super hot, not boiling)… or on a little saucepan Step 4: Pour the cream over the chopped chocola